Dreams don’t exactly make logical sense. Unless you’ve got plenty of time to browse dream meaning sites, you’re generally going to wake up completely clueless about what your subconscious was up to while you were sleeping. Luckily, when it comes to deciphering dream sequences in movies, well, that’s a whole lot easier.

Of course, some cinematic dreams are tougher to crack than others, like all the mind-bending visions in Inception. Christopher Nolan’s dream-heist film tells the story of thieves who gain access to subconscious worlds that hide very clear reflections of the dreamer’s fears, desires, and anxieties. While the movie might’ve gained a slightly unfair reputation for being hard to understand, we don’t blame anyone for getting a little confused at what all the various dream layers mean.

So today, we’re going to grab our totems, cue up “Non, Je Ne Regrette Rien”, and break down what’s real, what’s a dream, and what it all means for our group of sneaky dream thieves. From hallway fights to getting lost in limbo, here are the dream sequences in Inception explained. 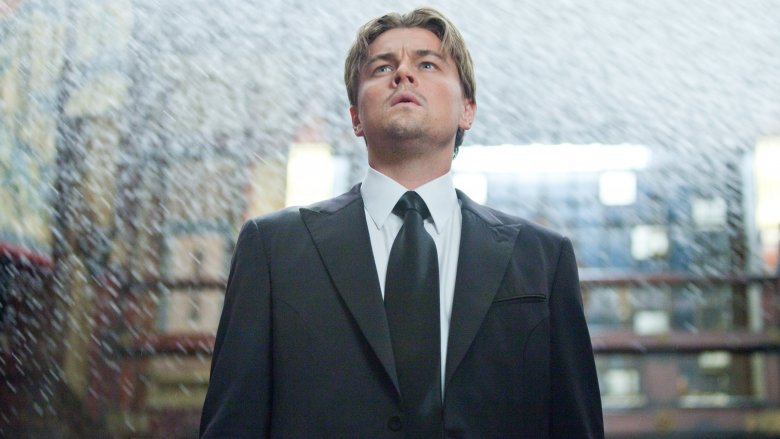 Inception takes place in a world that seems pretty similar to our own, dream-sharing technology aside. But what’s the story behind that tech? Well, as Arthur (Joseph Gordon-Levitt) tells Ariadne (Ellen Page) early in the film, the dream-sharing technology was developed by the military in order to facilitate a training program for soldiers in which they could practice killing each other without consequences. From there, the technology spread out to the underground, where Cobb (Leonardo DiCaprio) and his team use it for extraction, a process where they can steal a target’s secrets buried in their subconscious. In addition to extraction, there’s also inception, a technique in which an idea is implanted in the target’s subconscious in order to make the dreamer believe that the idea is their own.

At each level of shared dreaming, there has to be a dreamer and a subject. The dreamer builds the world, while the subject populates it with projections — subconscious thoughts that tear apart any dream intruders if the intruder’s presence is recognized. In addition, subjects are usually the target for the heists in Inception. They’re the ones whose subconscious is on display and are most susceptible to dream thieves. During Inception’s heist scenes, nearly every member of Cobb’s team functions as the dreamer, while Fischer (Cillian Murphy) remains the consistent subject.

Of course, there are other important roles in the dream heist. For example, there’s Ariadne as the architect, someone who builds in dream layer mazes to make it more difficult for Fischer’s subconscious to recognize the intruders. There’s Yusuf (Dileep Rao) as the chemist, who’s charged with creating a specific mixture of sedatives in order to keep Fischer unconscious long enough for the inception to work. And finally, Eames (Tom Hardy) makes his paycheck as the forger, someone able to impersonate people within the dream world.

So let’s start our Inception analysis with the second dream sequence we see in the film (we’ll get to the first later). This one takes place in Saito’s (Ken Watanabe) Japanese castle. Cobb and Arthur have gone into Saito’s subconscious in order to steal specific secrets hidden in Saito’s mind on behalf of Cobol Engineering, a rival company to Saito’s Proclus Global. In the castle, Saito keeps his most important secrets in a hidden safe. 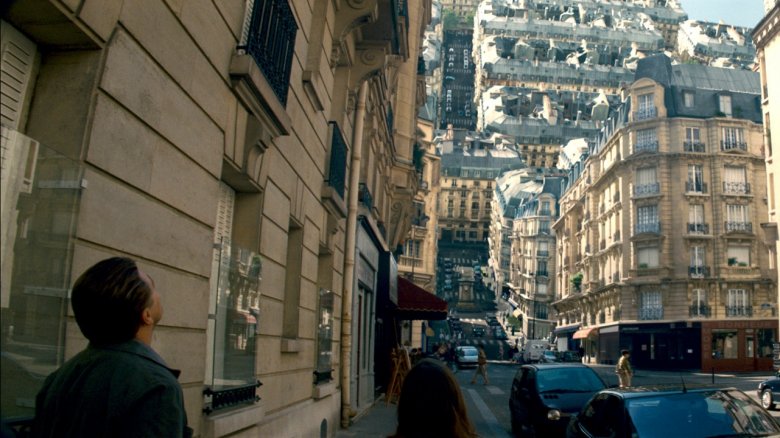 Cobb finds his way in there, but during the heist, Arthur is captured by Cobb’s wife, Mal (Marion Cotillard). Okay, technically, she’s a projection of Cobb’s subconscious and a reflection of the guilt that Cobb feels for his part in his wife’s death. Mal works with Saito, threatening to torture Arthur, but Cobb shoots his buddy in the head first, which begins to end the dream. With Arthur dead (i.e. awake), the dream begins to collapse, which makes Arthur the dreamer for the Japanese castle. Saito, the subject, is killed by falling rubble, causing him to wake up from the castle dream, while Cobb is pushed into a bathtub full of water in order to forcibly kick him out of the castle dream space.

After Cobb, Arthur, and Saito wake up from their little castle adventure, they find themselves in Saito’s secret apartment. At first, we think they’re back in the real world, but nope, this is the original dream. The castle was the second level of the dream, and Saito’s apartment is the first level, where the architect Nash (Lukas Haas) has created a replica of Saito’s real-life love nest.

So just like the castle dream, Saito remains the subject. But while Arthur was the dreamer of the castle (which is destroyed after he wakes up), Nash is the dreamer of the apartment. And things get pretty tense once Saito figures out he’s being conned by a bunch of dream thieves. He attacks Arthur and Nash, but Cobb gets the drop on him, interrogating Saito for information. As it turns out, Saito’s secrets in the second level of the dream weren’t completely available to Cobb, so he threatens Saito, trying to get him to reveal the info by force.

However, that’s when Saito realizes these dream thieves are really good at their jobs. Since Nash designed this apartment to mirror Saito’s secret getaway, the businessman is totally fooled at first … until he touches the carpet. That’s when he recognizes the carpeting is made of polyester instead of wool, like at his actual pad. With the knowledge that he’s still dreaming, Saito’s subconscious projections flood the room as angry rioters, killing the dream thieves and waking them up for real.

As it turns out, Saito was the mastermind behind the film’s first dream heist. He secretly hired Cobb and his crew to infiltrate his own subconscious. It was sort of a trial run. He wanted to see how good these guys were. And now that he’s impressed, he offers Cobb a job, asking if his team will perform inception on Robert Fischer, the heir of a rival conglomerate.

After accepting the job, Cobb meets up with Miles (Michael Caine), his former teacher and father-in-law, to see if there’s an architect talented enough to make it work. Miles sends him Ariadne, who, after a brief maze-drawing test, meets Cobb’s approval. At some point in their conversation, they wind up in a Parisian cafe, where Cobb shares an important aspect of dream sharing: When you’re dreaming, you don’t remember how you entered a location. The subject starts the dream during the action, with no build-up to what’s actually happening. Cobb reveals to Ariadne that she’s dreaming in order to show how easy it is to trick the subject into believing that a dream is reality. So if we want to get technical here, in the cafe, Ariadne is the subject, while Cobb is the dreamer. Once Ariadne realizes she’s in a dream, she panics, and it starts to collapse, waking both of them up.

After their visit to the imaginary cafe, Cobb and Ariadne head back into the dream world, but this time, Cobb is the subject. As the dreamer, Ariadne has full control over the reality of the dream and impresses Cobb by constructing a replica of the last dream’s location. However, Cobb warns her that if his subconscious projections perceive her to be an intruder, they’ll attack. Ariadne experiments with dream logic, folding over architecture and building the world of the dream around them as they walk. When Ariadne begins to construct actual architecture from real life, Cobb warns her away from the habit. He tells her that if she consistently uses whole subjects directly from real life, it can complicate the relationship a dreamer has to reality. It becomes nearly impossible to tell what’s real if your dreams look and feel just like reality.

Luckily, there’s a solution, which involves using a totem, a physical object that functions in a unique way that a dream thief wouldn’t be able to replicate. (Cobb’s totem is a top that stops spinning when he’s in the real world, Arthur uses a weighted die, and Ariadne eventually builds a hollowed-out bishop chess piece.) Within the dream in Paris, Ariadne’s physics-bending experiments lead to Cobb’s subconscious attacking her. Imaginary Mal pops up once again and delivers the killing blow by stabbing Ariadne in the stomach, waking her up.

Soon, Ariadne gets a crash course in building dream levels with Arthur, who takes her into a dream level of his own design. Here, Arthur is the dreamer while Ariadne is the subject, since Arthur’s the one controlling the architecture. In what looks to be an office building, Arthur shows Ariadne how dreamers can adjust architecture to make things that would be impossible in the real world. Arthur borrows an example from an impossible object created by Lionel and Roger Penrose, later popularized by M.C. Escher, in which a staircase constantly ascends in a looping circle.

Ariadne mentions that her subconscious doesn’t seem to be acting violent towards Arthur yet, but Arthur reveals that she has no real control over their response to his presence. If her subconscious perceives him to be a threat, they’ll attack him, even if Ariadne doesn’t want them to.

In dreams, Arthur explains, you can trick geography around the subject, creating shortcuts and dead ends to help with dream mazes. With closed loops and confusing geography, the dreamers can exist within the subject’s mind long enough to do what they need to do before getting torn apart by the projections. Arthur also reveals that Cobb doesn’t build dream layouts anymore, out of fear that if he knows the layout of the dream, so will his subconscious projection of Mal.

Ariadne learns even more about Cobb’s complicated relationship to his subconscious projection of Mal when she enters his dream late at night. It turns out that Cobb has been using the shared dreaming device to help him dream, since repeated exposure to the machine means that he can no longer naturally dream.

In this particular dream, Cobb is both dreamer and subject, while Ariadne is only an interloper exploring his memories. She has no control over the geography, while Cobb has filled his own dream with projections. Specifically, Cobb has built multiple levels of a building, each filled with his time with Mal and each representing a different moment that he wants to relive, or in some cases, that he wants to change.

In the real world, Mal killed herself while framing Cobb for her murder, making it impossible for him to return to America to be with his children. After finding out how deeply Mal is buried in Cobb’s subconscious, Ariadne insists on accompanying the team into Fischer’s dream, rather than just being the architect behind it. Only she understands how dangerous Mal, and by extension Cobb, can be.